Gary Cole is a former Socceroo, a Heidelberg United FC great, and a football leader with a diverse background and extensive leadership experience in football at Melbourne Victory, Sydney FC and Football Victoria. He coached at the AIS with Dr Ron Smith, was Assistant Socceroos Coach to Frank Arok, and also coached with success in the National Soccer League and the Victorian Premier League. Gary also serves on the Executive Committee of Football Coaches Australia – the official association of Australian football coaches. 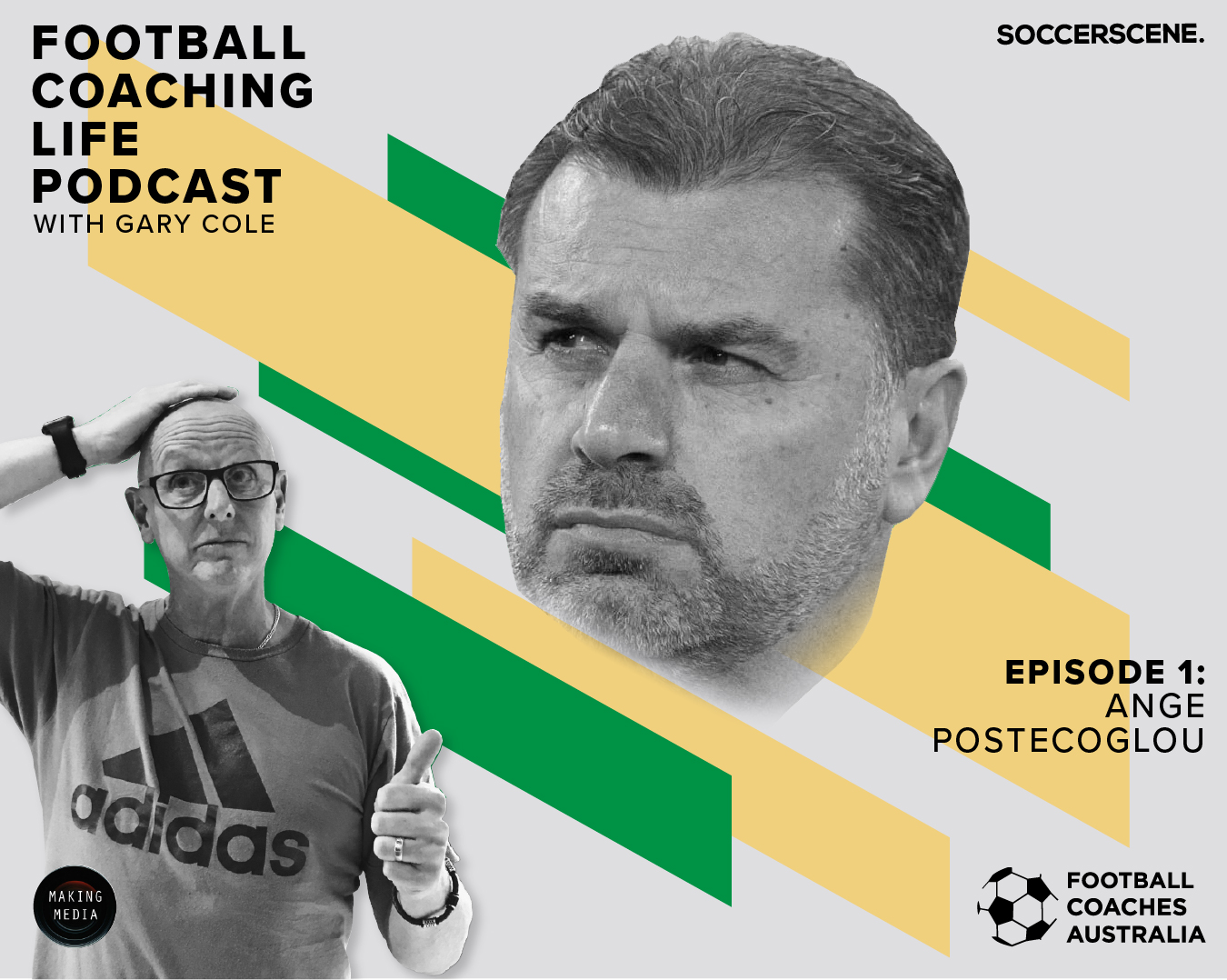 In this episode, Former Socceroo Gary Cole speaks with Ange Postecoglou, who is arguably Australia’s most successful football coach.

From his playing days with South Melbourne in the 1980s to coaching the Socceroos to victory in the 2015 Asian Cup, Ange Postecoglou’s uncompromising commitment to success has made a big impact on the Australian football landscape.

He won the old National Soccer League as a player and a coach, back-to-back A-League titles, and led the Brisbane Roar to the longest unbeaten run in any code with a 36-match winning streak.

As Head Coach, Ange took the Australian men’s national team The Socceroos to the 2014 FIFA World Cup, and coached them to the winner’s podium at the 2014 Asian Cup, departing the role before the team travelled to Russia for the 2018 FIFA World Cup.

He then moved to Japan where in 2019, as Head Coach of the Yokohama F Marinos, Postecoglou became the first Australian Coach to win a J-League title. 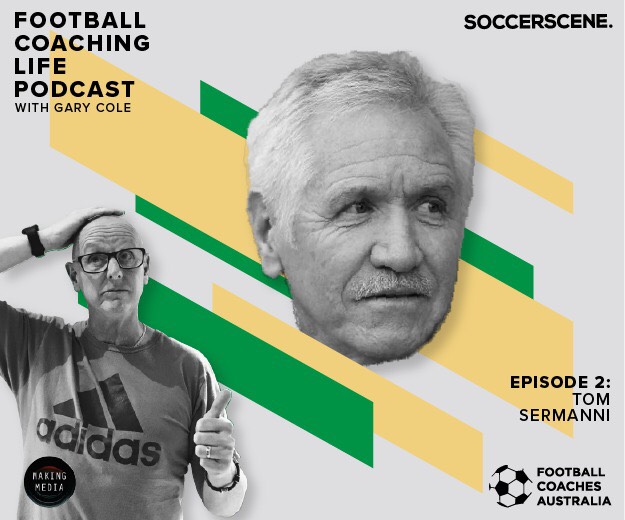 Tom has a Pro Licence and a Diploma in Education. He has coached at the Australian Institute of Sport (AIS), in the now defunct Australian National Soccer League, and in the J-League with Sanfrecce.

Along this incredible journey, Tom has coached players of all ages and genders, and it would be fair to say they have all left his tutelage a little wiser than when they started.

He is a warm, kind, and compassionate coach which comes out in this candid conversation with Gary. 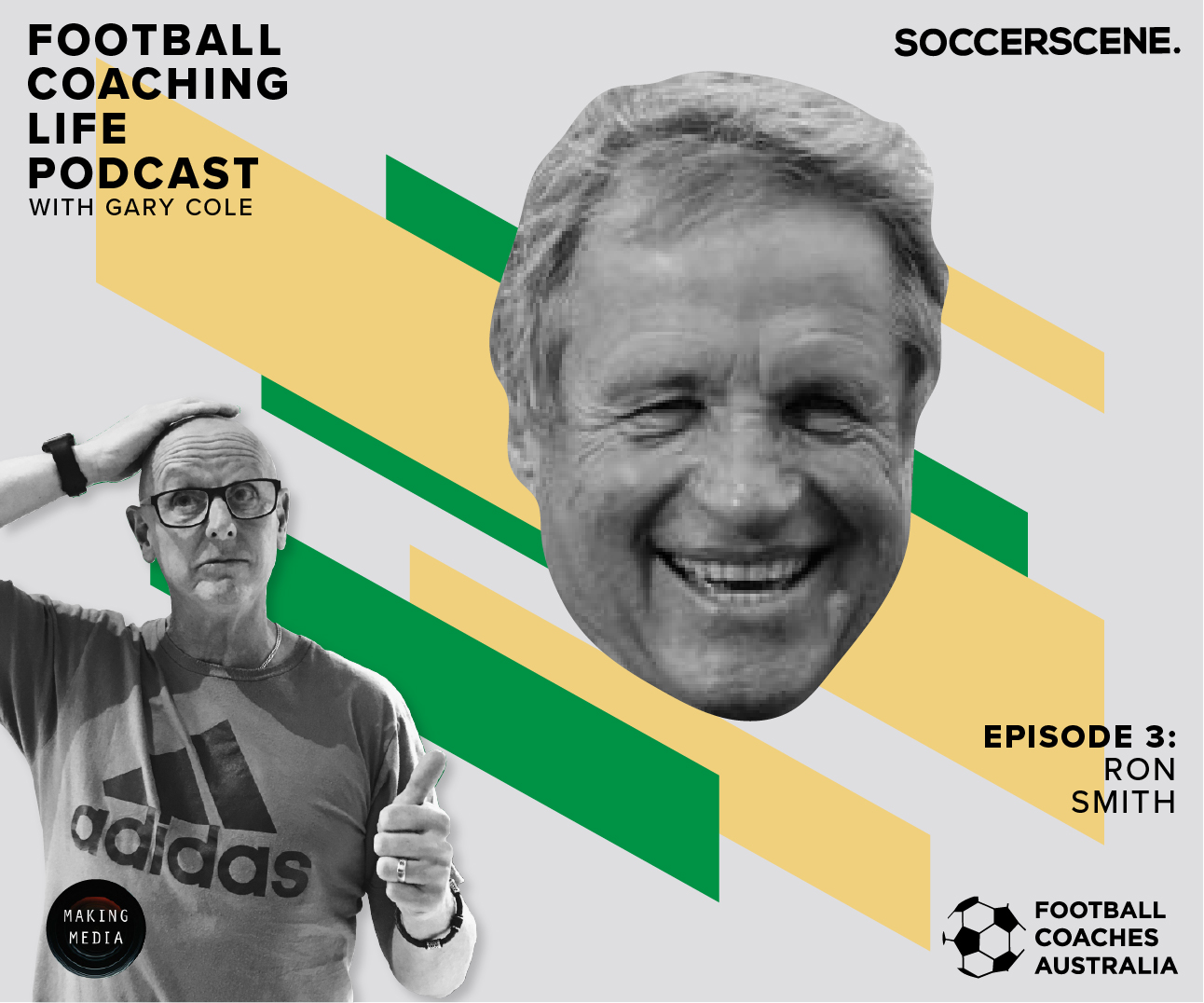 Dr. Ron Smith (Smudger to his friends) is well known in Australian Football circles. Often referred to as a ‘Coaching Guru’ and developer of many of Australia’s ‘Golden Generation’.

Prior to coming to Australia, Ron played at junior level at his beloved North London Tottenham Hotspurs before ‘dickie knees’ impacted his professional ambitions.

He has coached in Iceland and Malaysia as well as in Australia’s A-League with Perth Glory. Ron has assisted many of our National Team coaches as an analyst, attending both World and Asian Cups as well as part of Football Australia’s Technical Department on a couple of occasions.

Perhaps most well remembered as the hugely successful Coach at the Australian Institute of Sport in Canberra, where many wonderful players like Viduka, Aloisi, Bresciano, Moore, Neil, Skoko, Grella, Simunic and Zelic, to name a few, came through.

Smudger has been arguably our greatest student of the game, analysing thousands of EPL and International Men’s and Women’s World Cup games and sharing his knowledge and wisdom about the behaviours of the Worlds best. Perhaps his favourite topic is ‘How goals are scored’.

Heather Garriock is perhaps best known for the 130 caps she won representing the Matildas and her expert commentary on Optus Sport.

Her international career spread over 13 years and included 3 FIFA Women’s World Cups; 2 Olympic Games and 3 Asian Cups culminating in a win in 2010 in China.

Heather was a tenacious footballer which continued into her coaching career and now into her role as CEO of Taekwondo Australia.

In this frank and fearless conversation with former Socceroo Gary Cole, she explains how coaching and leadership has given her a different perspective on success. 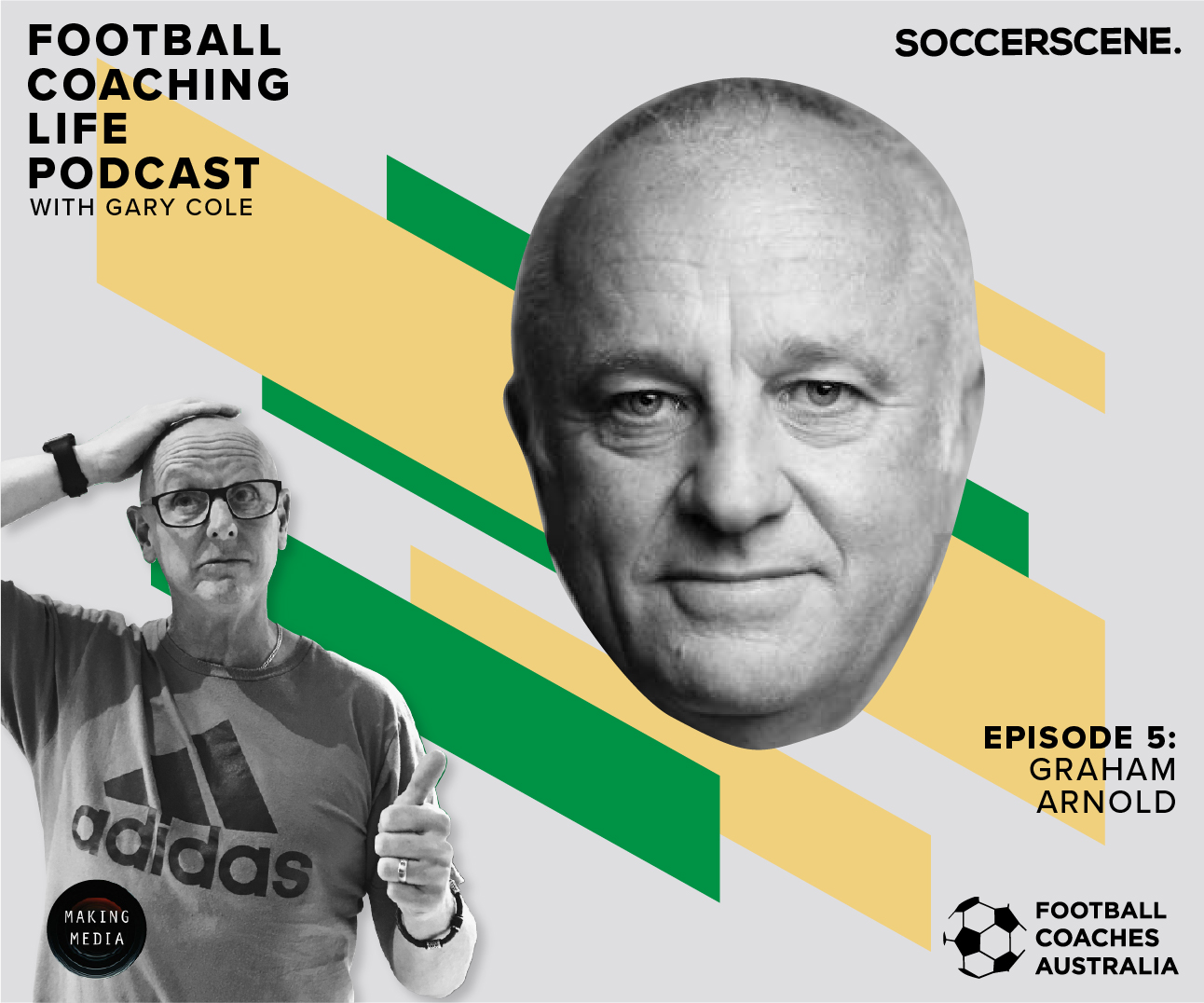 Graham Arnold more often referred to as ‘Arnie’ in Australian Football circles is our national Coach of both the Socceroos and the Olyroos.

The Socceroos are getting ready to complete their FIFA World Cup group qualifying phase in a centralised venue in Kuwait City and the Olyroos are waiting patiently to see if the Olympics are going ahead.

Graham is one a generation of players that passed through Sydney United 58 and went on to have successful playing and coaching careers. He had a distinguished playing career that started and finished here in Australia and took him to the Netherlands, Belgium and Japan and included 56 games for the Socceroos

He didn’t get to play in the World Cup but has now been to two World Cups as Assistant to Gus Hiddink and Pim Verbeek, coached at two Asian Cups and Tokyo will be his second Olympics as Head Coach.

Arnie has had wonderful success in the A-League, winning Premierships and Championships with Central Coast Mariners and Sydney FC, as well as the FFA Cup with Sydney FC.

Listen to this open and honest conversation between Graham and former Socceroo Gary Cole, in which the Socceroos coach talks about his coaching and leadership styles, how they have changed over the course of his journey, and the importance of mentors and developing resilience along the way.

He also discusses how the year of COVID-19 has enabled the development of more Olyroos.

Sit back, relax and enjoy these insights into Graham Arnold’s Football Coaching Life. 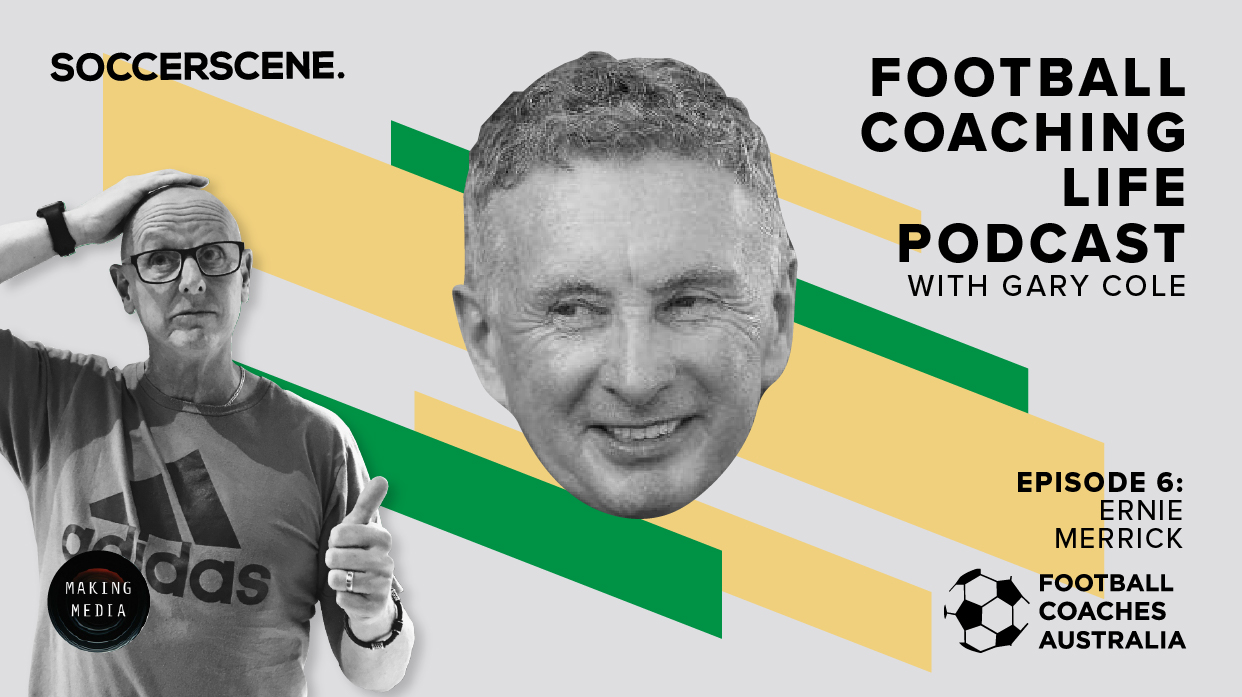 Ernie Merrick is well known in Australian Football circles. He has coached most recently at Newcastle Jets, Wellington Phoenix and Melbourne Victory in the A-League, where he had great on-field success in terms of both results and developing players. Ernie also had a short stint as the Coach of the Hong Kong National Team.

Prior to his A League experiences Ernie played at Frankston City, coached, and played at Doveton and was assistant coach at Frankston Pines in the State Premier League. He moved on from the Victorian competitions to the National Soccer League and coached at Preston Lions and Sunshine George Cross. He was then appointed as the inaugural Victorian Institute of Sport (VIS) Head Coach where he helped to develop players for the Australian Junior National teams – Josh Kennedy, Scott McDonald, Matthew Spiranovic, Eugene Galekovic, Paul Giannou, Con Blatsis, Danny Allsopp, Leigh Broxham, Adrian Leijer, Roddy & Andy Vargas, Jimmy Jeggo, Simon Colosimo and Vince Grella – to name a few!

Ernie’s teams have always had a focus on attacking and scoring goals and indeed his record shows this. 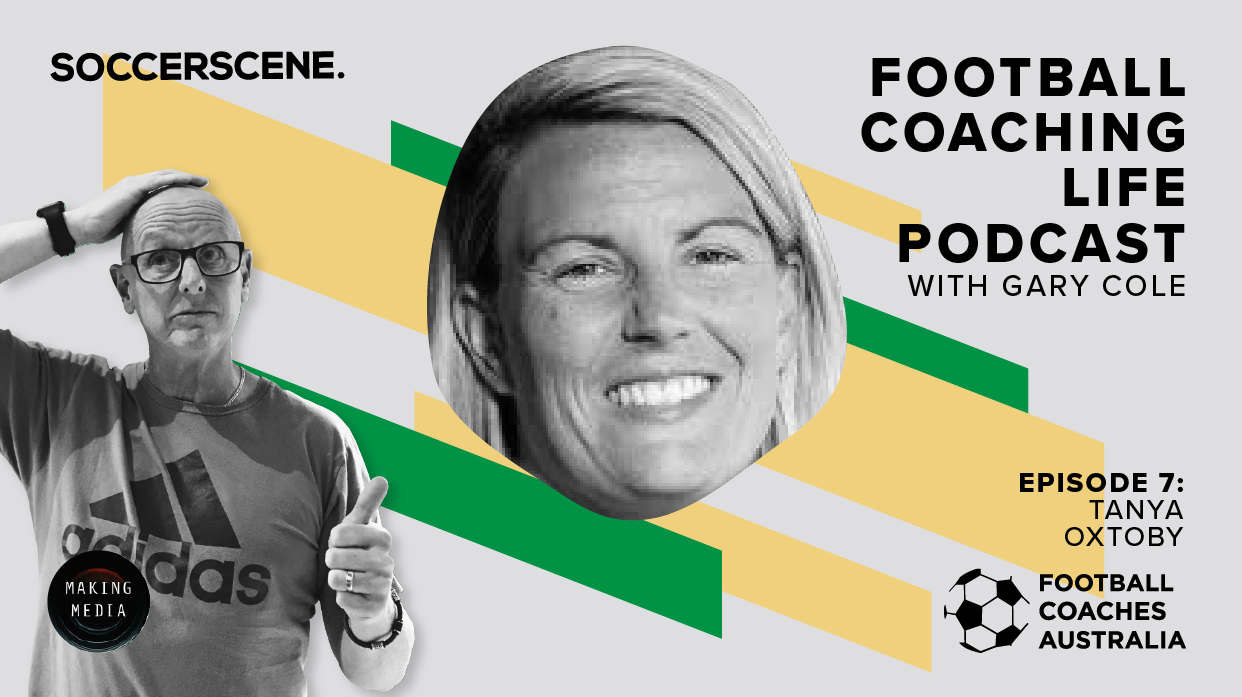 She is currently the Manager of Bristol City Women’s Football Club in the FA Women’s Super League, and Assistant Manager with the England U19s, albeit on maternity leave after giving birth to a new son, Albie Kempski-Oxtoby.

Tanya captained Perth Glory for 40 games across four seasons after playing in the WNSL alongside Tal Karp, Lisa De Vanna and Nicola Williams. Her playing journey took her to the UK to play in the FA Women’s National League with Doncaster Rovers Belles.

Her coaching journey began in WA at the Football West Training Centre as well as her establishing her own Football Academy. A UEFA A Licence and a Masters in Sports Psychology provides her a strong foundation to help grow and develop players and teams. Tanya worked at Notts County and Birmingham City before taking on the Head Coaching role at Bristol City in 2018 where she works with one of the smallest budgets in the competition.

Tanya was open, honest and willing to share in our discussion around coaching and developing players, the resilience needed to coach as well as coaching at the highest level while suffering from Covid and being pregnant!

Congratulations to Tanya and her partner Alice Kempski on the recent arrival of Albie Kempski-Oxtoby.